Bangkok for a day 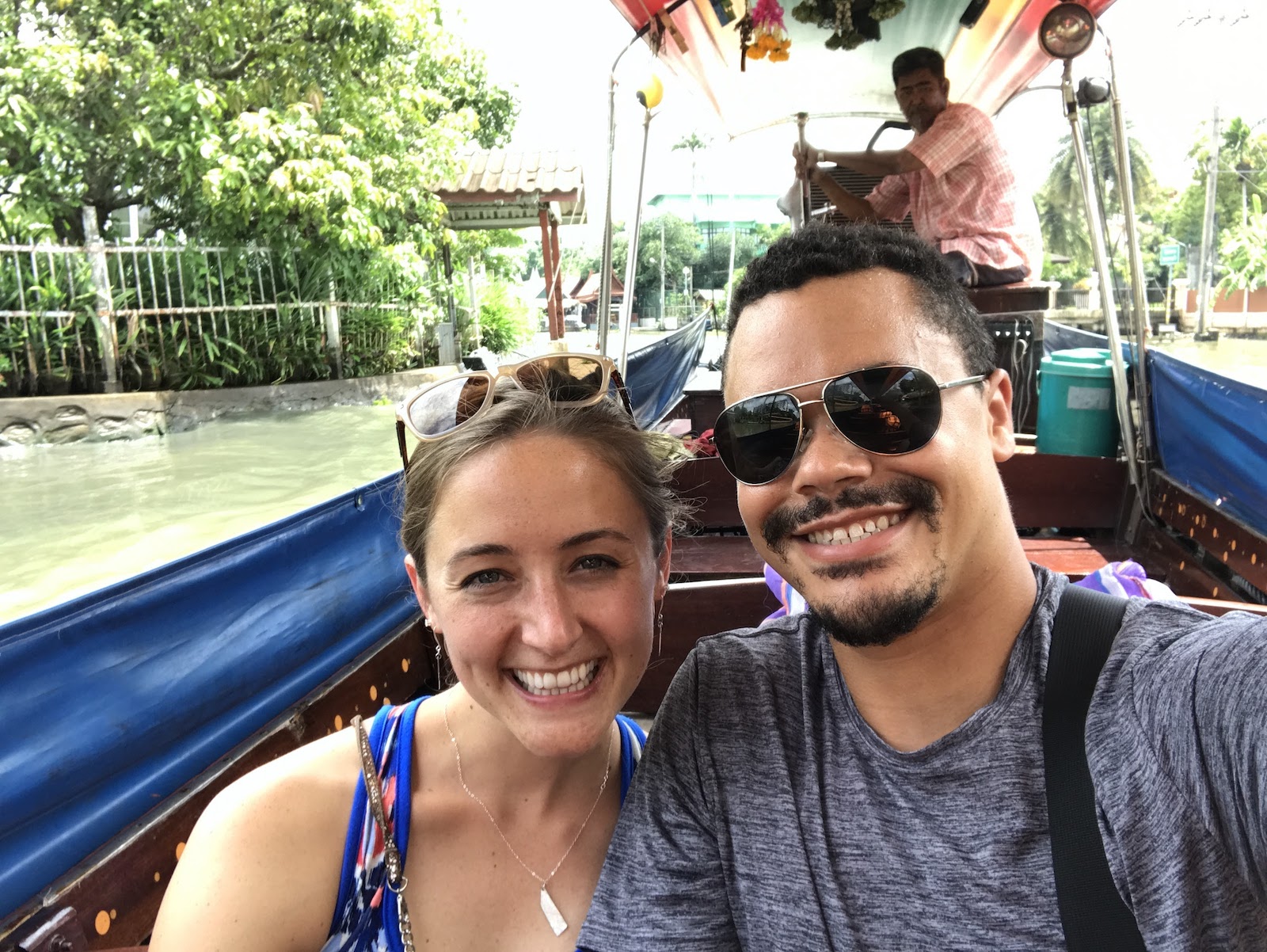 We loved Chiang Mai so much that we extended our stay by two days and so were left with only a day to explore the capital city of Thailand. Thanks to some lucky breaks and a million things to do, we really enjoyed our quick stay.

The arrival in Bangkok was a little bumpy but the first part of our night train ride from Chiang Mai was breathtakingly beautiful, weaving through the mountains, jungles, and rice paddies of northern Thailand. We were treated to a serene sunset before the conductor came through and transformed our booths into bunks. Things became a bit less cozy after that, partly thanks to a boisterous family that boarded and had a very different idea of bedtime than us. Still, we managed to scrape up a few hours of sleep and arrived in Bangkok seeking caffeine. When we finally found some wifi we discovered that our ticket to get to the island of Koh Tao the next day was not, in fact, a fly and ferry ticket but was actually a bus and ferry. After swallowing the initial dread of the 7 hour bus ride to come, we found a silver lining in the fact that the bus left in the morning from Khaosan Road, a major backpacking area of the city which is much more central than the airport. This meant we could stay in a more accessible spot and see a bit more of Bangkok than we had thought. We asked prices at various hostels until we found the perfect room that was tucked away from the chaotic street life. We showered, did some laundry with travel’s greatest invention- The Scrubba (I will likely do a post about how much I love this thing at some point)- and then headed out to explore feeling fresh.

One of the great things about meeting other travellers is that you can usually find someone who has been where you are going and can give you pointers. Almost everyone in Chiang Mai had been through Bangkok so we had a lot of advice to work with. The most popular things that people had recommended were the floating markets and the Grand Palace so we set off in search of them.

There are actually a number of floating markets around the Bangkok area, but many are a few hours drive and require advance planning that we clearly had not done. Luckily we arrived on a Saturday so a market within the city called Taling Chan was alive and bustling. Picking our way from stall to stall at the entry, we took a couple chances on interesting looking street food. Check out Kolt’s Bangkok food review for more details on that. Also check out “A Word from our Sponsor” if you’d like to hear more about the consequences of making such choices. Then we got to the main event: a long floating dock that ran parallel to the the river bank and was lined with narrow wooden boats. Inside these thin canoes were women working over grills, woks, and other cooking gear. They moved about smoothly, barely causing their boats to slant over the water, as they rapidly prepared entire meals and handed them up to the servers on the docks. Mouth-watering smells of spices, grilled seafood, and sweet curry wafted up and mingled with other less-appetizing scents in the humid city air. Propellers from the river boats lay down a low steady hum, pierced frequently by the shrill calls of vendors competing for attention. All around the boats swarmed enormous coy fish, literally teeming out of the water, feeding on all the scraps that were thrown over the sides. They were so dense along the docks that it often seemed like there were more fish than there was water. We ordered some chicken satay and pad thai and sat at a small table on the planks to take in the sights, sounds and smells.

Once our lunch was finished, we were put on a long and narrow wooden boat with a brightly colored paint job and matching cover. The driver taxied us to the pier next to the Grand Palace and we got a mini river-tour of the city out of the ride. Before getting dropped off, one of the other passengers informed us that we were actually riding on a boat she had rented for 2 hours which was supposed to be a private tour. Whoops! Seems like the dock conductor was all about those few extra baht.

For blocks and blocks surrounding the Grand Palace, Thai people congregated dressed in formal black clothing despite the heat and humidity (which I promise I won’t complain about because Thailand was way more reasonable in weather than Japan). From what I understand, the Thai king died last October and the country is in a year-long period of mourning so people come from all over to pay their respects at the palace. Thankfully they did not expect foreigners to also be in black but their rules for attire at the palace were actually stricter than the rules at the temples. Typically, we had just encountered dress codes for women- covering the knees, midriff and shoulders. But here they also enforced this for men, meaning that Kolt had to buy a pair of baggy elephant print pants in order to be allowed in. He rocked them, obviously, and we made our way through the Disney World-level crowds and past the outer walls. The grounds were expansive and well-kept and the rooftops of temples and various palace buildings peaked over the inner walls. Fighting the crowds, we muscled to the ticket counter but found that entrance was much more expensive than anything else we had seen in Thailand so we decided to simply appreciate the ornate rooftops for a while and then picked our way back to our hostel for another shower and a nap.

That night we set out to explore the Khaosan Road area and were treated to a flurry of activity in every street, alley and shop. There were people everywhere, dodging tuktuks and motorbikes. Street vendors were so dense that you could barely turn without bumping into a cart. Music blared from all the storefronts and groups of international tourists stumbled around the sidewalks and streets. Bangkok is not known for sobriety so most people were laughing loudly or yelling for a lost friend, adding to the already impressive noise level. We picked up some more street food, smiled at the mayhem, and then sought shelter in a nearby bar. While toasting our successful day with local beer, monsoon season made its presence known and the skies opened up. The streets that had been overflowing with people were emptied in a scramble as sheets of driving rain filled the tarps over market stalls and formed streams where there had been roads. Then, as quickly as it had started, the rain cleared and the nightlife renewed. When we woke the next morning at 5AM to catch our bus there were still a few groups of harried partiers stumbling back to their hostels. Thankful that we would not be experiencing their approaching hangovers, we grabbed 2 cans of coffee (it’s a thing) and boarded a bus bound for a ferry bound for the tropical island of Koh Tao!