Chiang Mai: a laid back mountain oasis of northern Thailand 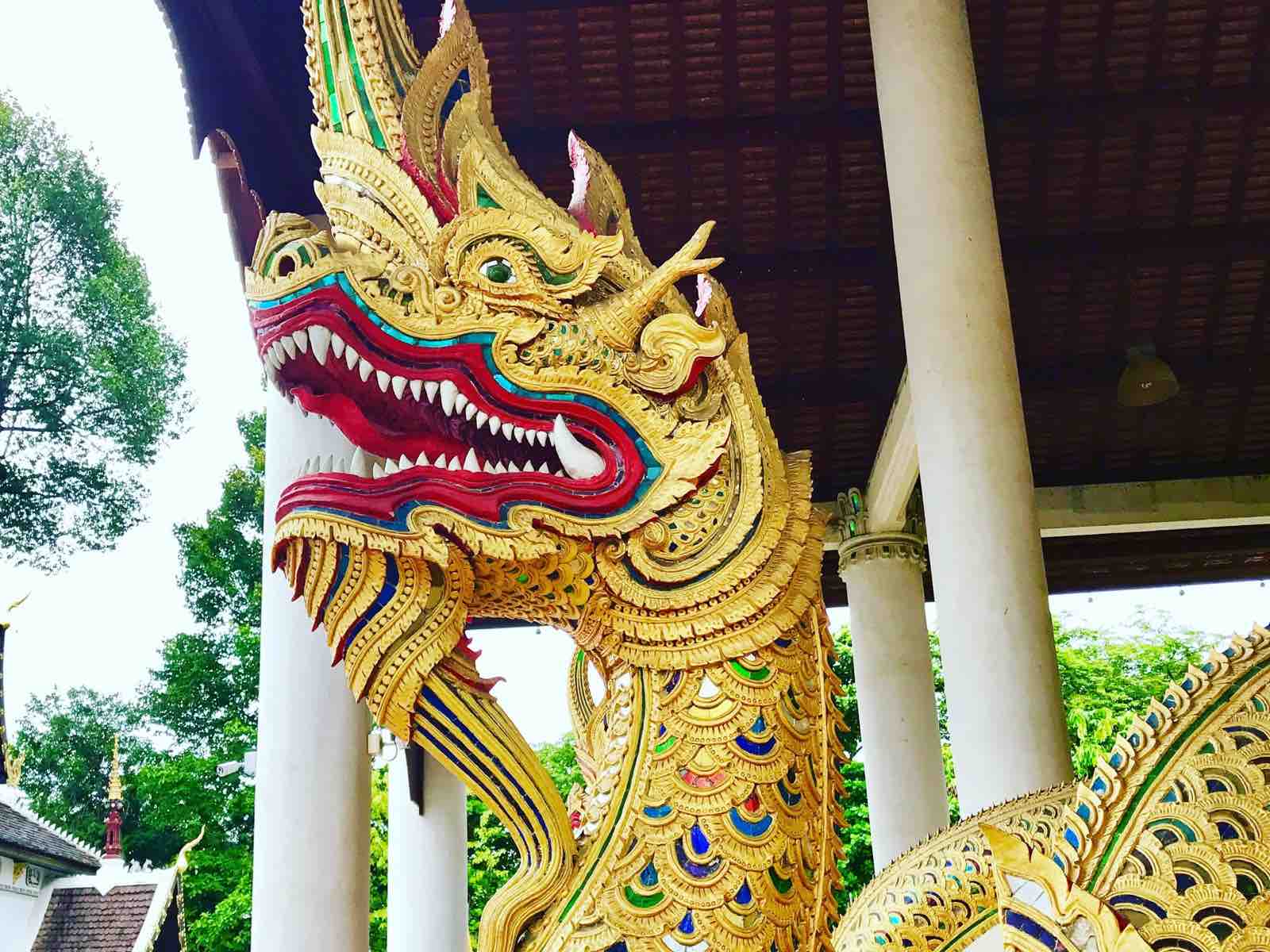 Mountaintop temples, elephant play dates, and nighttime bazaars. Chiang Mai was equal parts wonder, adventure and culture and we loved every minute of it!

From the moment we arrived in Chiang Mai, we felt ourselves relax. The Thai culture is joyfully informal and the people we met were welcoming and quick to laugh, usually at their own jokes. The extent of our relief may have been compounded by the depth of our disappointment the night before when, because I am a very budget-focused individual (read: cheap), I had pushed for us to stay in an AirBnb near the airport in Bangkok rather than the hotel at the airport to save $20. Without getting into too many details (think complicated pick-up situation, cement room with thin mattress pad on the floor, windows that don’t shut and noisy Bangkok streets), let’s just say that we did not get the best sleep of our life and felt pretty grimy by the time we landed in Chiang Mai the next day. But everything looked up at that point and we were in for almost a week of beauty, friendliness, and adventure.

The first thing we did was get a cab to a main area of the city where we found a group of English-speakers with backpacks (basically a solid 50% of Chiang Mai) and asked if they knew any good guesthouses nearby. They pointed us down the road and we came to The Living Place 1, an eclectic and homey little place where we were immediately embraced by the warm smile and enthusiastic laughter of Aree, one of the hosts there. She assured us we could stay with them and set about getting our room ready. After our previous night’s experience, we agreed heartily to splurging $7 more for a few nights in a private room rather than the dorms. Both Aree and her partner (and maybe husband?) Vi, are artists who have decorated their guesthouse with their own work. Throughout our stay they opened their lives as well as their home to us and were always available for conversations about their city, their country or just about life in general. It was such a privilege to be welcomed and helped along by locals and we got a lot more than a place to sleep out of our time with them.

After a little exploration and some delicious Thai food, we decided to check out the Thai massages that everyone raves about. This was an unequivocally good decision. In a nutshell, Thai massages are significantly more interactive. Think physical therapy mixed with deep tissue massage. The masseuse uses not just her hands and elbows but also her forearms, knees, feet, and body weight to apply pressure while stretching and repositioning every part of your body (seriously, head-to-toe) to maximize the release of the muscles. Clothes stay on and there are often multiple massage beds in a row so you get to hear how your neighbors massage is going as well. A full hour of this glory came out to roughly $6. Yes, you read that correctly, six US dollars. It was heaven and just the right medicine for settling in to this new city.

Another must-do activity in Chiang Mai is the Night Bazaar, a nightly market that pops up along various streets, intersecting alleys and corridors. Anything you could want (and some things that you’re confused as to who could want) is available in these little booths. The shopping is interspersed with food courts and stages for live music or dance. Most of the music is Thai cover bands of US classic rock or new pop hits. We have discovered a very curious affinity throughout Thailand for the song Country Roads by John Denver. I don’t know why this ballad about backroads of West Virginia resonate so deeply here, but it is on every single playlist. The quality of the cover music varies but you are guaranteed to be entertained regardless. Our first night there we ran into a couple we had met on the plane from Bangkok. Amaru is from Mongolia and Ayumi is from Japan but we were able to communicate well (thanks entirely to their ability to speak English) and had a fun time sharing Thai dishes and beer before heading back to our place and falling into a deep sleep. We returned to the Night Bazaar on our last night in Chiang Mai to see the Cabaret show that our hosts kept raving about. It turns out that a Cabaret is a “ladyboy” show and the rest of that story stays in Thailand.

One of the highlights of this part of our journey was a trip to an elephant conservatory called Dumbo Elephant Spa. A number of the animal attractions in Thailand, and around the world for that matter, are not so concerned about the well-being of the animals and we didn’t want to be part of the problem so we asked our hosts for recommendations of places that treat the elephants well. Thankfully, there is a new trend towards these types of places as more travellers are requesting them and we had a few to choose from. We headed out early in the morning in a 10 passenger van and snaked our way up hairpin mountain roads to the soundtrack of Taylor Swift’s lesser known works and, of course, a couple renditions of Country Roads for good measure. Arriving at the site, we were already stunned by the beautiful mountain views and dense jungle surrounding us, but we were quickly distracted by a group of five elephants casually loitering in the forest behind the main building. Our first task was to feed them, bringing grass, bags of fruit and cut-up gourds over which they let us put directly in their mouth (elephant teeth are super far back so there was no real danger of being bit). The exception being the 2 year old “baby” elephant who just walked right up to our bags and picked out all the bananas with his trunk before waddling away. It was amazing to be face to face with these intelligent and enormous creatures. My personal favorite was the 53year old matriarch/grandmother of the group, her face was creased with years and she seemed to radiate that steady gaze of wisdom and patience that can only come with age. Once all the food had been eaten, we headed to the river with two of the elephants for bath time. One of them, the 8 year old brother of the baby, was so thrilled with this activity that he rolled around like a dog in the water and we had to dodge his tree trunk legs and snake-like tail while we scrubbed and rinsed him down. The other one was 1 year pregnant (1 more year left to go) and she maintained a bit more class throughout the process but still seemed to like a good scrubbing. The handlers, called mahouts, encouraged the elphants to spray us with their trunks and we had a good old fashioned water fight before heading back up to a home-cooked meal and laughter with the rest of our group. The elephants, meanwhile, lost no time in throwing dirt on themselves as soon as they were out of the water and headed back into the trees. The ride back down the mountain was still harrowing but the memories that came back with us made it more than worth it.

Another day in Chiang Mai we rented a motorbike and drove to the top of Doi Suthep (a mountain) to see a golden temple called Wat Phra That Doi Suthep. The ride itself was a treat with dense jungle on all sides, occasionally parted by viewpoints that look out over the entire city of Chiang Mai. We hiked the hundreds of steps to the temple and were awed by the shining golden statues and monuments all glinting in the sunlight. The mountain breeze set small bells tinkling around the temple grounds and people spoke in hushed whispers as we strolled around, marvelling at the devotion that created so many sites like these.

On the ride back down, we stopped at a nature reserve and hiked to the top of a waterfall. Jungle hiking is new to both of us and we certainly got a bit jumpy when following a trail through grass that towered over our heads, listening to strange guttural noises in the distance. A cicada as big as my hand landed on a tree near us and explained the chainsaw-like chirping we had been hearing all afternoon. After getting too comfortable in the pools at the top of the falls and finding a bunch of small leeches on our legs, we found our way back to the guesthouse, taking time to get a little lost in the active streets of the city on our way.

On top of these highlights, we saw a number of other ornate holy places and some ancient ruins of city walls and temples. We also met people at our guesthouse from various parts of the world with diverse backgrounds, motivations for travel, and dreams for their life. Our time in this city was rejuvenating and I wouldn’t be surprised if we make our way back one day. On our last afternoon we trekked to the train station and boarded an overnight train bound for Bangkok, looking forward to the stops ahead but still a bit hesitant to leave such a wonderful place.