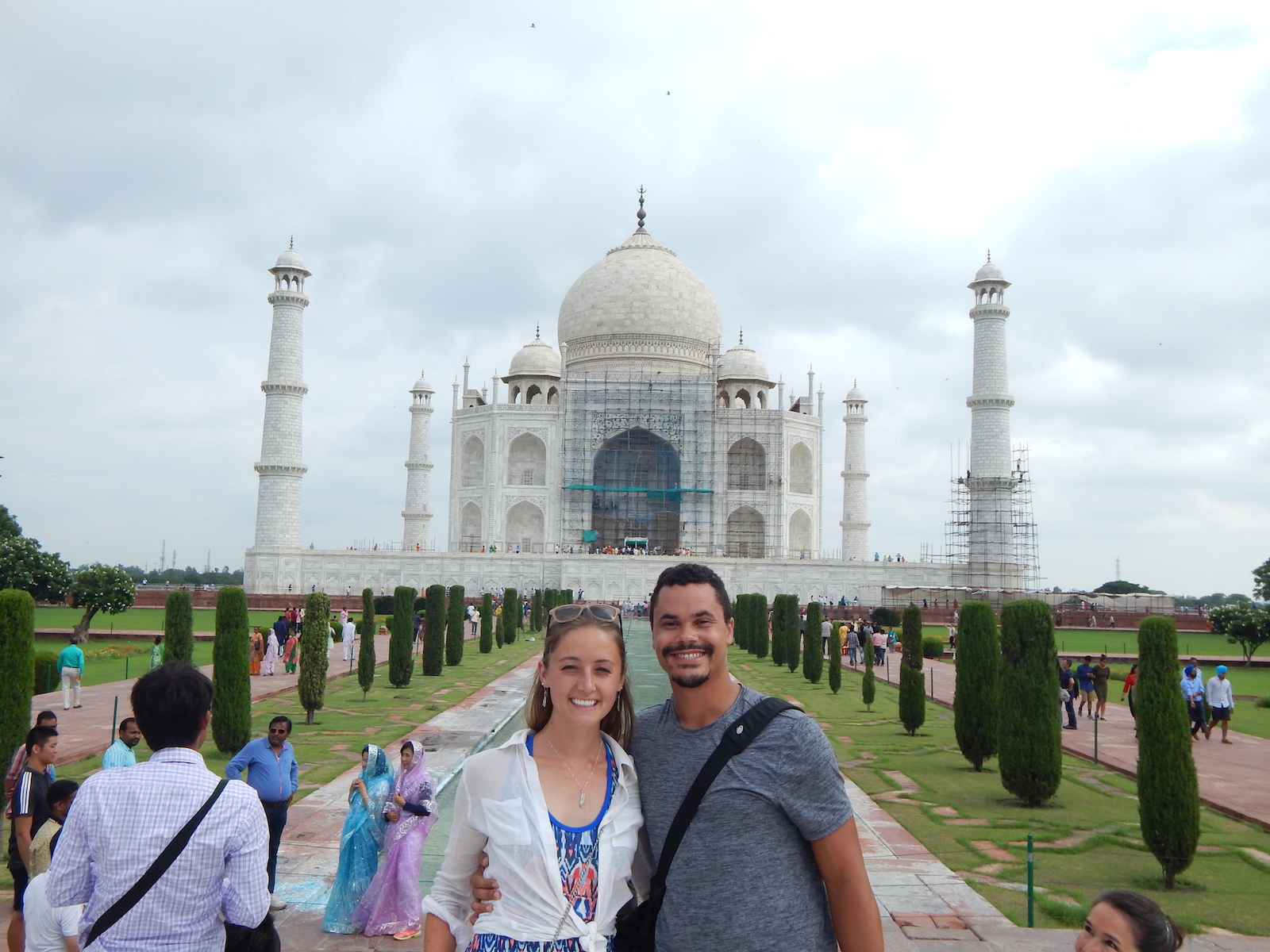 A quick trip to a corner of the globe that is bursting with history, culture and life!

I don’t think I’ve encountered a city as widely disliked as Delhi. Nearly everyone we spoke to both before and during our travels warned us about the chaos, scams, poverty and heat we would encounter while there. So we entered our time in India with expectations low and guards up. We were incredibly lucky to have one of my college roommates available to host us on arrival. Elizabeth is a US diplomat stationed in New Delhi and she is very badass. She picked us up from the airport with her blue diplomatic license plates and proceeded to drive unflustered through the infamous Delhi traffic, dodging people, cows, rickshaws, bikes, buses and other drivers. On arriving at her apartment we were greeted by her 4 month-old puppy, Max, a very comfortable guest room, a toilet that actually flushes toilet paper (everywhere else you have to throw it in a trashcan) and a warm shower. It was glorious. We spent that first evening catching up over a delicious dinner of Indian cuisine at a hip restaurant called Sodabottleopenerwalla.

The next morning Kolt and I set off to brave the reportedly most chaotic area of this city: Old Delhi. This is where a number of the major sites are located as well as the densely packed market streets. We started our day at Jama Masjid, the biggest mosque in India. Thinking I had done things right by wearing loose-fitting clothes that covered my legs and shoulders, I rolled my eyes at the tourists in shorts and tank tops being made to wear long floral wraps around the site. And then, in the spirit of karma, I was taken down a peg and was made to wear one on entering. My best guess is that this was because my arms (not shoulders) were showing but I’m still not entirely sure. The mumu, though seemingly one step removed from your great aunt’s tacky bed sheet, was lightweight and I barely noticed it after putting it on. Inside the mosque grounds was expansive and the stonework was ornate. We even climbed to the top of one of the minarets and got a view of the entire cityscape. From here we went to the Red Fort, an ancient fortress with interior palaces and mosques that has been modified in various way by each successive ruling people group. It was like history had deposited itself in layers throughout the complex.

Needing some food after our touring, we made our way down Choudi Chowk, the major market street in Old Delhi, overflowing with saree shops, street carts, and storefronts for any need. There is a vast and incomprehensible network of back alleys that branch from this street, snaking through even more vendor stalls and promising to get you lost in the process. Avoiding Delhi Belly and a little gun shy from our Thailand fun, we opted out of the food stalls scattering the steet and settled for a bag of chips and some soda as emergency fuel. Then we marched on to the spice market where we wandered past aromatic sacks of turmeric, cardamom, anise, and more. The smells, sights and sounds were everything India had been in my expectations and then more.

The next day we took an early train to Agra and found a tuk tuk driver for the day named Bobby. He took us to the Taj Mahal and gave us some tips on how not to get scammed. The Taj is everything it is built up to be. Rising from the rough and crowded streets of Agra, it is pure, smooth and regal. The white marble is semi-translucent so the sunlight filters through and the structure changes color slightly throughout the day. The sheer enormity it is enough to awe you, but then you look closely at the detail work and see not only intricate floral patterns but also flowing Arabic calligraphy inlaid throughout the marble with precious and semiprecious stones. It is astounding. The story behind the Taj is compelling as well: a heartbroken emperor’s tribute to his beloved wife after she died in childbirth. An attempt to represent the heavenly realm over her remains. Maybe it’s a little trite, but something about the Taj anchored me in the present moment. It was as though I was looking at time past, marveling at all the time to come, and convicted of the simultaneous magnitude and inconsequence of the here and now.

The Taj rises above everything else in Agra so it is visible from many restaurants as well as from Agra Fort, the other major site in the city, filled with its own stories and wonders. Bobby gave us a scare after the Taj, but in order to tell the story well I’ll put that in a separate post (see The Day We Should Have Been Robbed). Otherwise it was a pretty easy day and we ended with an hour in a hidden little garden that looks out over the river at the North side of the Taj, which I think was even more beautiful than the actual entrance at the South gate. Our train back to Delhi was comfortable and they kept bringing us food, flowers and tea. We finished off the day by ordering take-out at Elizabeth’s for a cozy Saturday night.

Our last morning in Delhi, we all spent time walking peacefully around Lodi Gardens and staying out of the city chaos. After another delicious lunch, Kolt and I jumped in a cab to the airport and headed for Kerala, a state in southern India. Pleased with our rapid tour of Delhi and Agra but also exhausted, we left hopeful for a little less bustle, a little more breathing.