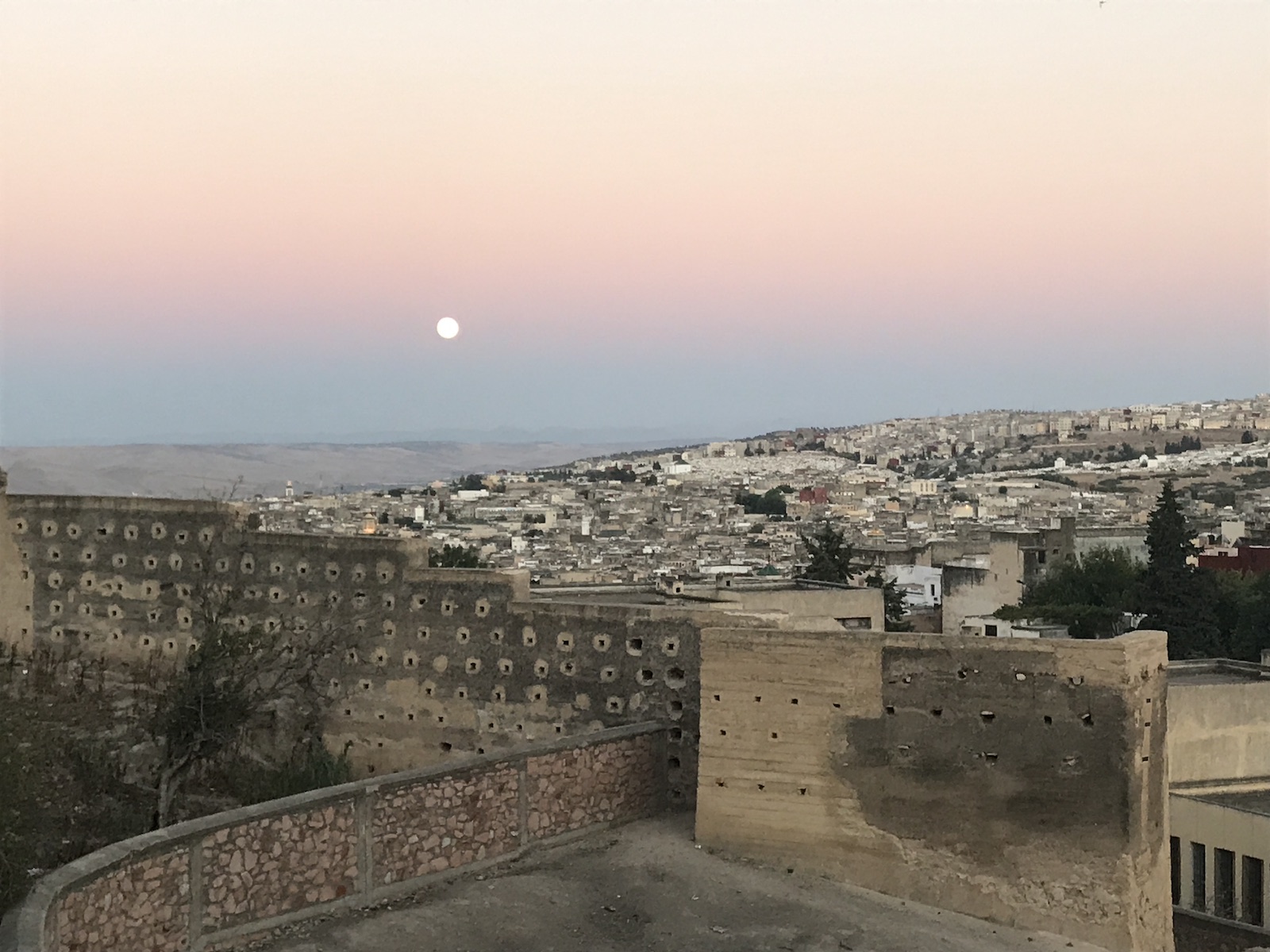 Leaving Chefchaouen was a bit trickier than arriving. The buses were sold out by the time we tried to book (the night before we left), so we took guidance from our hostel reception and traveled like the locals on the taxis.

There were 2 girls from Belgium at our hostel who were going our way so we joined forces and headed to the taxi stand- a parking lot of vans and sedans with drivers calling out at each passerby and a small shaded area filled with all walks of life united in the misery of wasted time. After a long wait, many stares, fending off a few unsavory characters, and watching a handful of fights break out, we sealed a deal with a driver and headed to Fes. The ride included a surprise vehicle and driver switch and a few curious route choices, but we had leg room, windows that rolled down, and Snickers to keep us satisfied.

We rolled into Fes in the late afternoon and miraculously found our way to our AirBnb in the maze of the country’s oldest and biggest medina. While not much on the outside, the home we stayed in had a fabulous rooftop made for relaxing and getting to know new friends. Our host was welcoming and helpful, but he really blew us away with his cooking. That first night he made a seafood tagine that was my pick for best food of all our time in Morocco.

The jewel of Fes is its medina: a labyrinth of covered narrow streets, lit by filtered sunlight and lined with market stalls that open and close in some prearranged cryptic schedule. Blogs had warned of harassment from wannabe guides, heckling tourists relentlessly. Maybe it was the thick skin we had developed in some other places (*cough*India*cough*), but we found it relatively easy to decline and move along. Per our host’s advice, we got ourselves good and lost on our first day, wandering down dead-ends and through tangled alleyways. After finally finding our way back we had established a rough map in our head and had a much easier time navigating going forward.

A few days in, we visited the leather tanneries in the middle of the medina, infamous for the potent stench created by vats of urine and pigeon droppings used to soften the hides. The tanneries can be viewed from rooftops of surrounding shops (in exchange for a purchase or a tip) and they kindly provide lifesaving bunches of fresh mint to hold in front of your nose while you view the process below. While it was interesting to watch the work of the tannery, seeing piles of hides and hearing about the ingredients used certainly didn’t make me want to go on a shopping spree.

You can hike up a neighboring hill just outside the walls and watch the medina light itself up as light and unforgiving heat fade away with the sun. There are over a dozen mosques within the walls and their calls to prayer are slightly staggered, varied in pitch and timing, giving a surreal echo effect to the soundtrack of the city.

It was in Fes that we met a couple from Grand Rapids, Michigan who became our travel buddies throughout Morocco. Not only did we run into them multiple times in Fes and while on separate cross-country tours, we also ended up staying at the same riad as them in Marrakech, by complete coincidence. Ricardo and Heather also quit their jobs and sold their things (but in their case this included a house!) to travel the world. It was encouraging to talk to people on a similar path and debrief together about the ridiculous, frustrating or confusing parts of our travels together.

Marrakech was similar to Fes in its bustle and pace, but it has a more modern feel to its streets and an expansive main square called Jemaa el-Fna which shifts from one curiosity to another as day turns to night. In the light, it is a vast open market with bare cinder blocks and booths selling snacks, fresh squeezed juice and trinkets. You have to keep watch to make sure no one puts a monkey on your shoulder and then demands payment. There are snake charmers and henna artists and a handful of people strolling about. But at night the bricks become patios, restaurants appearing from nowhere. The monkeys and snakes are exchanged for lantern-lit musicians and bold street hawkers. The trickle of people becomes a jumbled mass, flooding neighboring rooftops for a local meal. These are the kinds of places that can overwhelm a traveler as you are jostled by passing shoulders and accosted by persistent restaurant reps who will follow you for blocks with menus and promises. (*Side note, all restaurants have the same 3 basic options: couscous, tagine, or bruschettes. The difference in quality is not based on the price or the fanciness of the restaurant. Good luck*). But these are also the places you can best feel a pulse. If you can roll with the chaos, keep a firm hand on your bag, and find new ways to duck and weave past the salesmen, you get to be immersed in a world of otherwise hidden wonders.

Our riad was a respite from the Marrakech crowds. Set apart down a snaking medina street and equipped with a peaceful plunge pool and rooftop lounge chairs, it provided us with a place to recharge during the heat of the day. The staff were kind and indispensable in their advice, such as where and how to get a hammam session done. Hammam is a Moroccan tradition- often done weekly by the locals in public bathhouses. It consists of a steam room followed by a body scrub with hydrating oil-based black soap, and then a stretching/pulling massage. We couldn’t speak enough Arabic to figure out the nearby public bath, so we opted for a mid-range hammam on the edges of the medina. It was… an experience. And now that we have both emerged without some strange fungus and the raw scrape marks on Kolt’s limbs have healed, we can look back and say we tried it. That’s enough hammam though.

After two weeks in Morocco, we left with heads swimming from sensory overload. And 3 months later, as I finally write this, we look back at those weeks with hearts full of bright memories and adventure. I met my travel crush, and it did not disappoint.