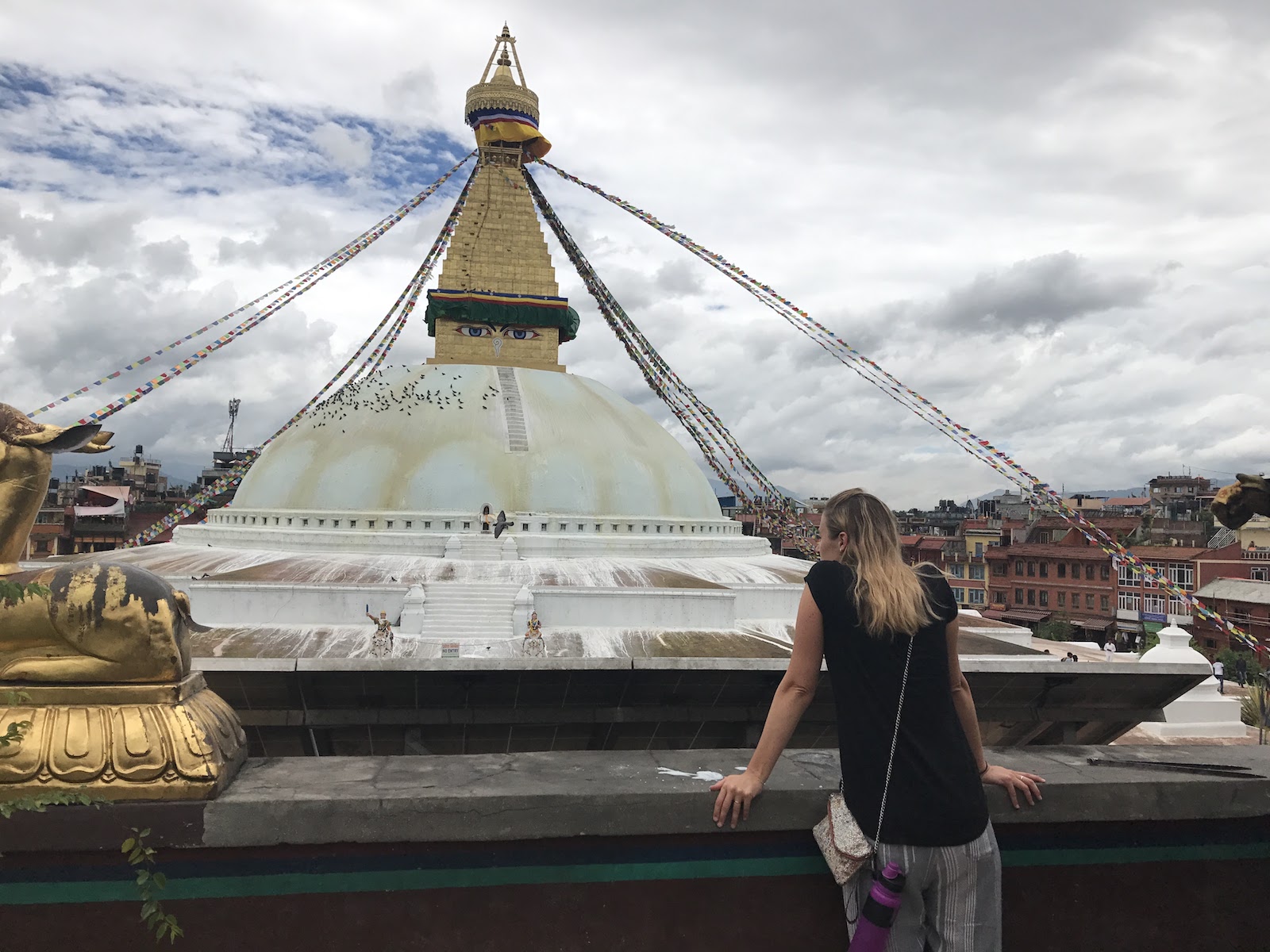 Our quick stay in a spectacularly chaotic city, full of stupas, colors and so much life!

While we were in Chiang Mai, we met a handful of travellers who told us that they didn’t really like Kathmandu and that going to Nepal in the rainy season (not being able to trek) was kind of a waste of time. We actually changed our flights so that we would only be in Nepal for 2 full days because of all the negative feedback we heard. Well, as the time-honored saying goes, haters gonna hate. Holy cannoli, Kathmandu is beyond cool. I’m not sorry we switched flights, it gave us 3 more days on Koh Tao and let us really enjoy the island, but if we had known what we were going to experience in Kathmandu we would have had a tough time deciding!

Now, to be fair, I can see why Kathmandu might rub people the wrong way. If you’re coming to Nepal expecting nature, crisp air, and meditative silence, you will absolutely not be happy with this city and will high-tail it for the countryside as soon as possible. The streets are dusty in the sun, trenches of mud form in the rain, and the traffic is a beast all its own. No street signs, traffic lights or lane markers make riding in a cab an extreme sport and a comfortable 2-way street magically morphs into a 6-lane highway complete with bikes, pedestrians and the occasional cow. There is noise, there is hustle, and there are approximately 25,000 (this is a real estimate) street dogs that like to serenade you at night. But in all the mayhem, Kathmandu is absolutely teeming with life and culture. It is saturated in bright hues everywhere you look: from the prayer flags that stream over homes, streets, temples, and trees; to the buildings that are an eclectic mix of designs and paint jobs; to the people who somehow make color palettes from the show Teletubbies look elegant and fashionable. I mean honestly, if I wore lipstick red pants, an emerald green tunic and a royal purple scarf at home I would look like a tacky Christmas wreath. But somehow here it is effortlessly glamorous. Don’t know what to pair with those tangerine trousers? How about an aquamarine belly shirt and a canary yellow shawl. And it works! I’m not saying I could pull it off, but the Nepalese sure can!

Amongst the colors, the streets are filled with the constant smell of incense. At one of the temples we visited, so many incense sticks had been burnt in one spot that the resulting smell was more of a jasmine-floral-campfire effect. There’s also a steady soundtrack of tibetan chants coming from shops, restaurants and homes, accompanied by high-pitched stringed instruments and flute-like notes. We were there during a Buddhist holiday so we also had the fun wake-up call of snare drums and cymbals from a marching regiment at 5:15 each morning (after which we promptly fell back asleep).

The rhythm of the city rises and falls. The crowded streets and marketplaces are fast-paced, keeping you on your guard and wary of your surroundings. But the back streets are a steady throb of life, with kind or curious eyes in nodding heads, murmurs of “namaste” back and forth. Then on arriving at the sacred sites, the tempo slows, even stops. The noises of nearby roads are drowned out by hushed reverence as bells are rung and prayer wheels spin. The colorful prayer flags decorate the grounds and flap easily in the breeze. And all of this life is held in the cupped hands of the surrounding foothills of the Himalayas, which appear and catch you off guard as you gaze around, and serve to remind you that the world is made up of much more than human creation.

We arrived in Kathmandu in the dark after an 18 hour day of travel from Koh Tao. Side note: that day of travel entertainingly required that we use almost every form of transportation- truck to ferry boat to bus to plane to train to plane to cab. We got to our AirBnb in Thamel (a major backpacker/tourist area and central to all the major sites) in the dark and were apprehensive about what the next day might bring. On waking, our very kind host and his wife made us a complimentary fresh and home-cooked breakfast with sweet milk tea before showing us a map of the city and recommending which sites we should see with our limited time. We took off walking for Swayambhunath , or “Monkey Temple,” and waded through the muddy backstreets. At one point we were confused as to what small path the map was suggesting we take, so a group of curious school kids served as our guides and brought us to the next major road and the hundred stairs leading to our destination.

On arriving at the temple, I fell in love. The design was striking: an enormous, white washed, gently rounded stupa with a square-based golden tower perched atop it. From the base of the tower, the sharp eyes of Buddha gleamed out on each side and prayer flags draped down to trees or structures below. Monkeys roamed about, looking for food, climbing everything in sight, and diving into the designated monkey swimming pool. The ambiance was serene, set up on a mountain far above the city, tinkling bells in the background, and all the visitors circling the stupa with low murmurs. We visited another place of worship similar to this the following day called Boudhanath. That one was was much larger and set in the midst of a well-populated square, filled with artisan shops and Buddhist monasteries. While very different in their surroundings, both stupas had a similar feeling of wonder and presence about them. Like many things we’ve been seeing on our travels, they made us feel very small, but in a good way.

We also had the chance to visit Patan Durbar Square- ruins of an old palace and surrounding kingdom in the Kathmandu area. The 2015 earthquake caused a lot of destruction and lasting damage to many of Nepal’s historic sites and this was no exception, but there is clearly a lot of work being done to restore their treasured landmarks. While here, we saw the Hindu Golden Temple which was tucked away down some back alleys. A man inside the temple grounds kept trying to guide us into a dark room and up some shady looking staircase promising a “very beautiful goombah” upstairs. Since everyone who offers to guide you at these sites will absolutely ask for money we had to decline multiple times and make our way out without seeking the “goombah” ourselves. On researching later, there apparently is a beautiful statue up those stairs but I’m not sorry that we listened to our gut and ducked out of that one.

We finished our last day with a visit to the Garden of Dreams, an aptly named large garden in the midst of the city, and thought it would be appropriate spend some time dreaming about the future. We both agree that we will have to return to Nepal one day during the dry season (we hear September-October are best) and get out into the Himalayas for some trekking. Our few days in Kathmandu were a whirlwind but they were wonderful and we can’t wait to make our way back some day.