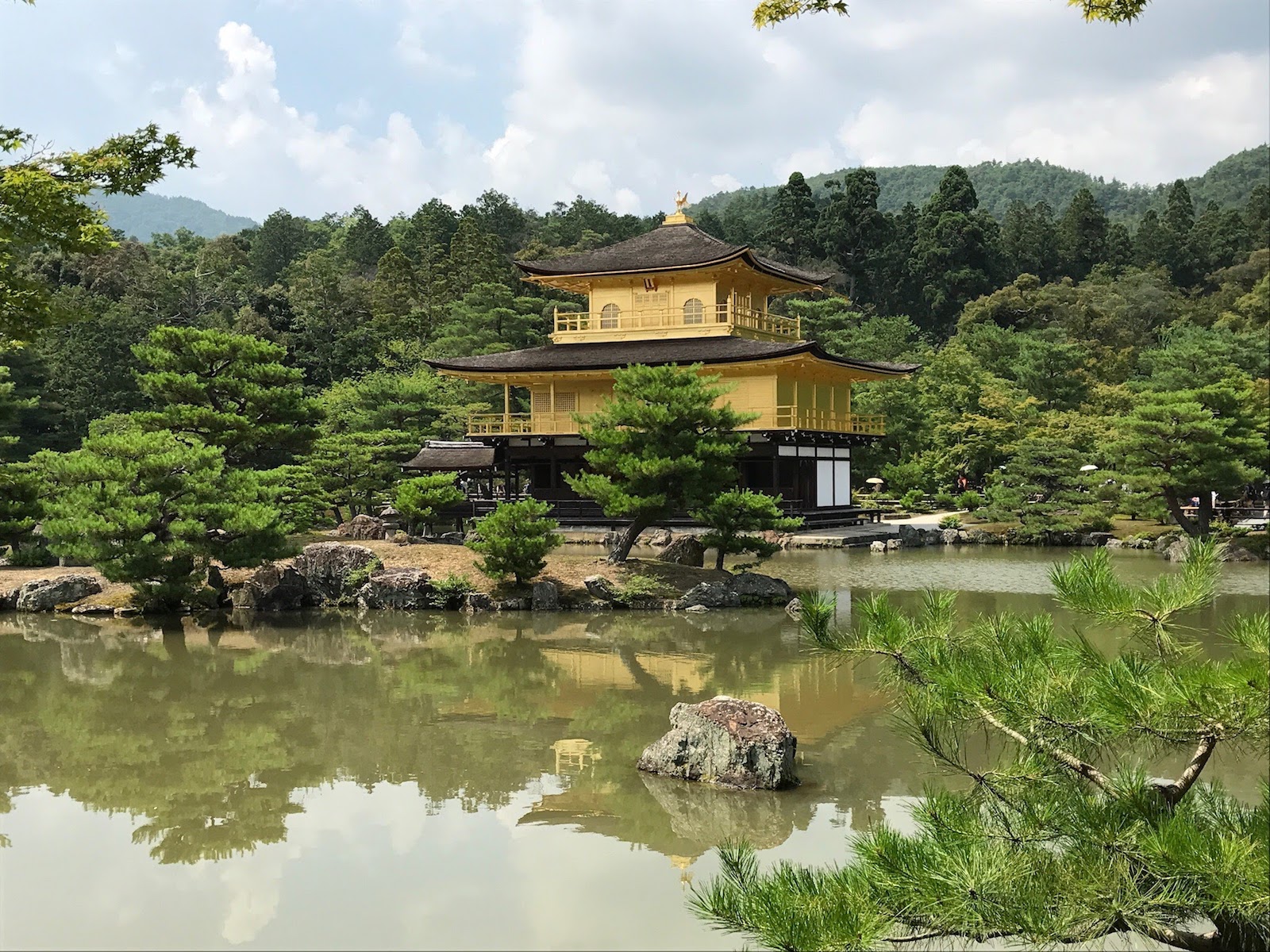 We were entranced with Tokyo's classy cousin from the first afternoon we arrived. The spiritual meets nature here and it could not be more serene.

Our first afternoon in Kyoto made it clear that we had left the din of the city and entered into an entirely different realm, rich in history, spirituality, and tradition. Looking to explore our new area, we wandered up our street and within minutes found ourselves in a temple complex that hadn’t been mentioned on any of the tourist maps or travel guides. The quietness within the walls was so deep and purposeful that our voices immediately hushed to whispers. Fragrant incense filled our noses while our eyes took in ponds of floating lotus flowers, ancient hillside gardens and ornate golden figures. As our senses adjusted, we recognized music drifting from behind a grove of trees. The song was so unfamiliar that it took time for our ears to distinguish the melody (if that’s even the right word for what this was) from the low hum of nature around us. We followed the sounds through the trees, up stone steps, and over a long stone pathway. As we stood in front of yet another temple, listening to what felt like unearthly noises, we saw the orange robes and shaved heads of young buddhist monks through gaps in the temple walls. They continued their mixture of singing and chanting with intermittent percussion of cymbals. While the rules of the song were unintelligible to us, the monks sang along in unison, continuing as we slowly backed down the path once again.

Turn your sound up and have a listen!

From that first stop, we made our way up towards a major temple in our area. Taking a side path through a park, we were led into and through a serene cemetery, packed tightly with upright stone pillars and altars. The Japanese cremate those who pass and a family shares a single plot for generations. The descendents continue to pay to keep the plot and come to offer gifts and pay respects at the small altars there. Like everything else in Kyoto, the cemetery was on a rolling hillside which we trekked through in near silence; only breaking it to whisper words that fell far short of describing our surreal surroundings. There were almost no other people in sight for the whole time we walked, our only travel companion being a regal gray heron that was swooping over the scene. Then the path opened onto an entrance to Kiyomizu-dera, a major temple and tourist attraction which was also gorgeous but far less peaceful and much more crowded (unless you were counting the dead). Kyoto is speckled with various temples, pagodas and shrines throughout its winding and hilly streets. Strolling around after dinner that first night, we kept turning corners and finding ourselves in front of another breathtaking structure, towering over the surrounding shops or casting dancing shadows from hanging paper lanterns.

I promise I won’t go day by day here, but there are a few more stops to detail. The first morning we woke early and headed for Fushimi Inari, a collection of thousands of red-orange Shinto (the other major religion in Japan aside from Buddhism, from what I understand it’s essentially a collection of traditional beliefs) shrines that cover a stone pathway up and down a sacred mountain. They are built one after another with only a foot or so between them, giving you a sense of enclosure as you climb the miles up a steep mountain slope. Because we were lucky enough to arrive early and masochistic enough to climb the whole mountain, we got pockets of time all to ourselves underneath the canopy of trees and shrines. During these times, we could hear the water whispering as it flowed down the mountain, the movement through the cedar boughs sounded like gentle breathing. The deep green of a mountain wood contrasted vividly with the bright orange hue of the shrines and the filtered sunlight cast slanting shadows through the crossbeams and onto our path. The day was hot and humid but a cool breeze would occasionally indulge us, bringing the smell of moss and stone with it. As we headed back down the mountain, we breathed in the quiet expanse surrounding us. Then, sweaty but smiling, we went home and napped.

The other highlights of Kyoto included a small but still surreal bamboo forest. The massive plants towered over the path, dwarfing us in their arching trunks. As one disgruntled tourist along the way informed me, bamboo is actually a grass so this really isn’t a forest at all, but it was impressive nonetheless. And she might have needed a nap. We also went to a monkey park which I was pessimistic about, assuming it would be an enclosure of monkeys, but I was happily surprised when it turned out that these macaques just live on that particular mountain and have become comfortable with humans so we got to walk around a part of their home with all sizes of monkeys scurrying about. We did get to hand feed them but we had to be in a glorified cage of a room to do so, which I found wonderfully ironic. This way they associate food only with that location and don’t harass everyone who comes up their mountain.

In all, we spent almost 6 days in Kyoto and have some extremely beautiful memories from that time. We also had some rough days which facilitated hard but meaningful conversations. For a more entertaining anectdote, see the post about our fail day. We really enjoyed our time in Japan and the opportunity to learn from such a deeply traditional and respectful culture. On July 10th, we said sayonara and flew out for Thailand.