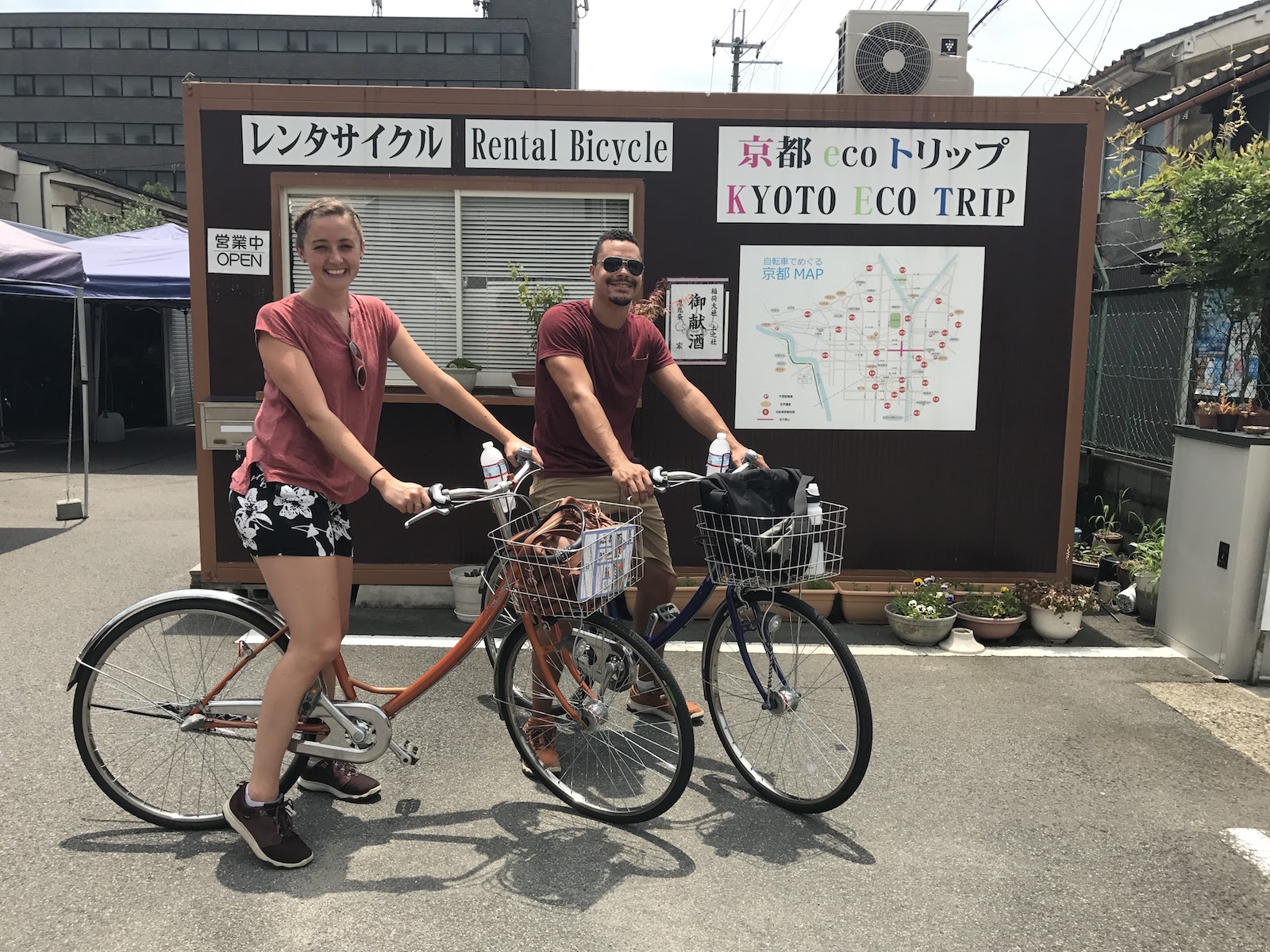 An entertaining take on a rough day in Kyoto.

Now for some real talk. Travel is awesome but it also comes with some real crappy days (literally and figuratively). I want to give you a glimpse into the beauty of what we’re getting to see, but I also want to be honest about how things do not always go as we plan. Find exhibit A below:

During our time in Kyoto, we of course continued to eat delicious Japanese food all day everyday, which helped me to solve one of life’s great mysteries: it is indeed possible to eat too much sushi. This lesson was unfortunately imparted on me by my bowels the day after I surpassed suggested levels of human sushi intake. This also happened to be a day it was over 95 degrees, sunny, and 100+% humidity. To top it off, we had decided it was a great idea to rent bikes- which makes so much sense seeing how Kyoto is full of hills and old cobblestone streets with stairs. In case you’re very bad at picking up on foreshadowing, let me go ahead and surprise you: it did not go well.

After a relatively short time biking through the undulating streets with a belly that was doing an imitation of the laffy taffy puller from Willy Wonka, all I could think of were a few of Skye’s more choice descriptive term for hot places, mostly having to do with various parts of Satan’s body (if you don’t know Skye and her gift for new vocab words it’s your loss). My own body seemed to be a veritable waterpark of sweat. I knew I was not doing well when I realized I was sweating significantly more than Kol, who tends to look like he just showered the moment he steps into the sun. After quickly recognizing that we would not get far with my useless, sloshy body and needed to seek food, we found that we had missed lunch hour in Kyoto (restaurants are weirdly limited in the hours they stay open for meals) so we raised the white flag and headed for a haven of familiarity: McDonald's. Bike parking, which is only in specified and mostly paid areas, was not nearby and was unnecessarily complicated so by the time we got to that shameful retreat of all Americans abroad, we were desperate. After finally placing an order, overcoming a significant language barrier with miming and pointing like the neanderthals we had become, we discovered that our trusted harbor of Mickey D’s did not, in fact, take credit card and we did not have enough yen. With a few more choice words going through my mind and a couple of them coming out of Kolt’s mouth, I dragged my sweaty, jet-lagged and now very hungry body through the heat once more as we found an ATM. Minimum withdrawal at Japanese ATMs is 10,000yen, or around $90. This was our last full day in Japan. Anyone need some extra yen? We returned back to finish what we had started, then finally ate our nuggets of defeat and BigMac of brokenness before pedalling back to our apartment to sleep away the afternoon… which resulted in us missing dinner hour in Kyoto. One last attempt to enjoy the bikes before returning them reminded us that the most beautiful parts of town are also the most hilly. We were also reminded of the childhood humiliation that comes with walking your bike up hills in front of strangers. Deciding that it was not worth pretending this day could be salvaged, Kolt ate a cheese dog and I had ice cream for dinner. Yeah, yeah, yeah, I know ice cream on a bad stomach is not an adult decision, bite me. We boarded a train that was frustratingly crowded for 10:30 at night and retreated back to our room where we spent the next hour drinking convenience store beer and laughing at everything that went wrong. And now we have good memories of that horrible day, because we redeemed it through humor and a good old-fashioned vent session, proving what modern art has known all along: even the ugly things are frame worthy, it just depends on the frame you choose (that’s either super corny or belongs on an etsy word art print... or both).