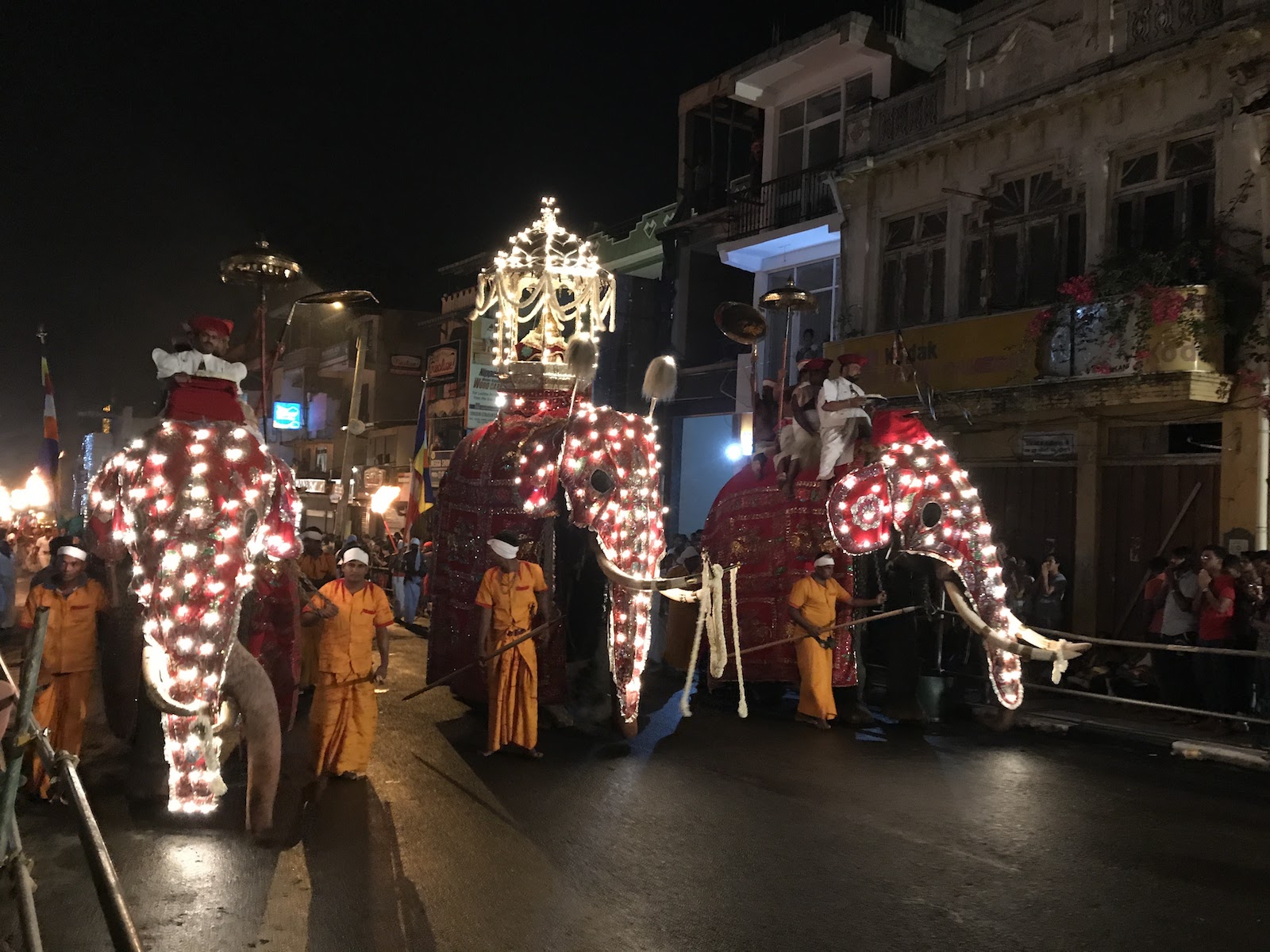 From a surprise festival, to an ancient rock kingdom, to gorgeous mountain hikes, Sri Lanka was an unforgettable experience!

Sri Lanka is a tiny country. It’s about the size of West Virginia, like ¼ the size of Michigan or Colorado. So when we planned 8 days for a visit we thought we were being generous. But in reality this little place is chock-full of history, nature and experiences just waiting to be explored. It would be easy to spend 3 weeks here and still feel a bit crammed.

To be fair, a lot of the time it takes to explore Sri Lanka is due to the inefficiency of public transportation. There is a limited train system, which gives beautiful views but does not exactly distinguish itself with rapid transit times. I saw a speed limit sign on one section of the tracks (not near a station) for 15km per hour, a whopping equivalent of 9mph, which is still much faster than I can run a mile but that’s beside the point. The buses are also a smidge less than lightning fast and are about as comfortable as you would expect given that they are essentially school buses that no longer meet safety requirements and are at triple capacity with grown-ass adults who are all pretending that they don’t smell your B.O. because air conditioning is just not a thing. That being said, they are gloriously cheap and get you where you need to go while giving you that feeling of accomplishment that can only come with knowing that you figured out and survived something that thousands of people do without difficulty or drama every day.

When we first arrived we had to make our way onto a 4 hour bus to Kandy. While waiting at the station, we were informed that there was actually a MAJOR 2 week long festival going on in the city and everybody was heading there so the buses were even more crowded than usual. We made it on the bus but only because the conductor took pity on us and helped us find room. People were packed like sardines and some were hanging out of doorways to fit. The driver actually had us sit on the big raised section next to his seat, meant for luggage, which was great because we didn’t have to stand the whole time. Unfortunately, I think this section covered the engine because my thighs and booty were simmering on a kind of stove top which I can only assume became quite apparent when I eventually stood up.

That night in Kandy we got to watch a parade like nothing I’ve ever seen before. It started around 8:30pm and went until midnight. The streets shimmered with silver-plated dancers, fire twirlers, plate spinners, drums, flutes and about 30 tricked-out elephants. The festival, Perahera, is a presentation and celebration of the Sacred Tooth- a tooth of Buddha that resides in a temple there. Nearly all the performers are young or teenage boys and I honestly don’t know how that many boys exist in the entire country. People come from throughout the Buddhist world to see the festivities. We were so lucky to stumble on this and get a glimpse into the vivid culture around their religion. Tired from a long day of travel, we called it a night around 11pm and drifted off to the rhythmic clamour outside our walls.

The next morning I braved the crowds and went to the Temple of the Tooth while Kolt recharged at a nearby cafe. Seeing the temple and the river of devoted worshippers was impressive, but my favorite part was the World Buddhism Museum that was tucked away on the grounds. It showcased snapshots of the various Buddhist structures and cultures around the world but also gave a history and explanation of Buddhism that was new to me. I so appreciate the chance to see the things that we share as well as the parts that make religions and cultures so distinct. Standing by myself in front of one of the displays, I was so moved by the nearly invisible and yet infinite threads that unite us as humanity.

After Kandy we went to Dambulla and continued exploring. We climbed Sigiriya, a massive rock formation towering in the middle of an otherwise smooth landscape. An ancient kingdom was built on top of this rock and the ruins remain spread around, allowing you to imagine what the palace and grounds could have been like in their prime, and giving an insta-worthy view from the top. There is even a pair of lion’s paws carved into the rock at the base of the final climb to the top. We were also able to venture into cave temples covered with rock painting and filled with buddha statues. It continues to amaze me how devoted people are to worship throughout history.

Unfortunately, in Dambulla, we lost a true friend and valued member of our team: my left Birkenstock sandal. The story is simple: in Asian culture it is respectful to leave your shoes outside the entrance to a home. Our host had a puppy. That’s all you really need to know. It was awful. I composed a eulogy. We had a very awkward interaction with our host about it. He took the sandal to a shoe-maker the next day and they MacGyver’d it back together. I now refer to it affectionately as Frankenflop.

After Dambulla we boarded a train from Kandy up into the mountains of Ella. We’ve read very reputable sources (*coughPinterestcough*) that call this “the most beautiful train ride in the world.” Not having been on all of the world’s trains, I can neither confirm nor deny this. However, it was definitely the most beautiful train ride I’ve taken. The aged and rickety blue rail cars snaked their way up and around the mountains, rocking back and forth on the tracks with creaks and groans. Outside, palms mixed with evergreens and the sporadic gaps in the foliage would reveal either a breathtaking view of the valleys below, steep slopes of tea plantations, or a silvery tumble of waterfall. Safety rules are not a thing so you could hang out the windows or sit in the open doorways with your feet dangling over the tracks. It’s the kind of transportation that is a destination.

Ella town was a tourist haven, surprising considering nothing else in the larger cities we had visited seemed to be. We welcomed the variety of restaurants and cafes as well as the more western-style dress. The main draw of this area is hiking so we climbed a mountain or two, hiked along the rail tracks, and spent some time in nature. Lured by the low price-tag of $5, we decided to get haircuts. Let’s just say I don’t recommend trying that (unless you’re a dude, Kolt’s went very well). We also were able to visit a tea factory and watch the process turning the fresh leaves into a biscuit-worthy brew. Then we got to sit and enjoy the blends we had just learned about, set above a stunning backdrop of verdant tea plants and rolling mountainsides, of course.

Since we loved that train ride so much (but actually because there is no good cheap alternative), we took it the full 10 hours back to the capital of Colombo the night before we left. Having spent another week with curry, we dropped our stuff at a hostel, got the most American crispy chicken sandwich I’ve ever seen abroad, and inhaled a couple of oreo milkshakes. Then we rested-up and readied ourselves for leaving for leaving behind southern Asia and heading to the Middle East.