The Day We Should Have Been Robbed 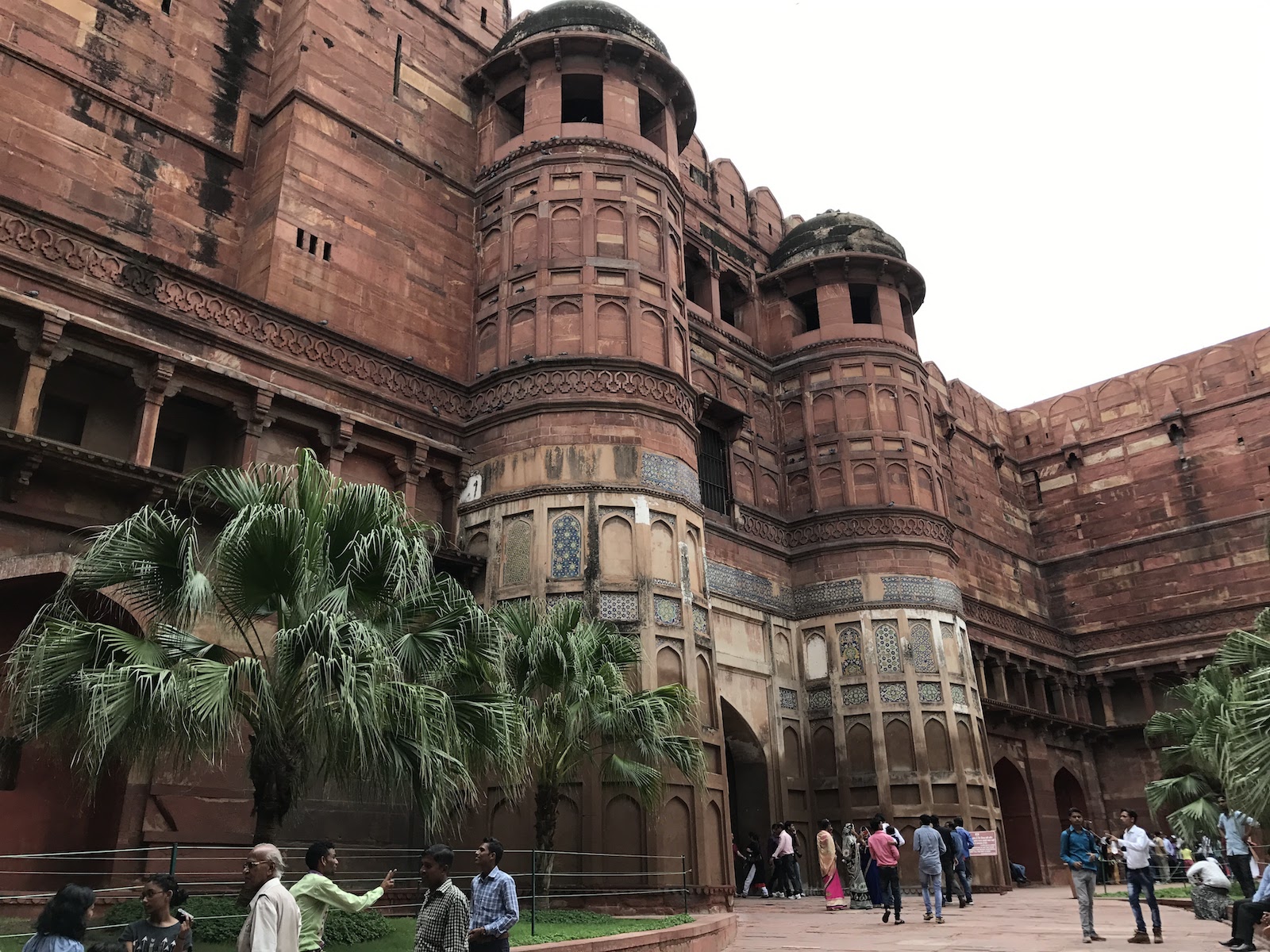 A day when we did something stupid but humanity cut us a break.

On our second full day in India, we took a train out to Agra on a mission to see the celebrated Taj Mahal. We had already been practicing avoiding scams in Old Delhi and felt ready to dodge some more. Steeling ourselves with a deep breath, we stepped out into the parking lot of the Agra train station and were immediately surrounded, swarmed, flocked, besieged by drivers. I swear we were rolling about 15 deep at one point. They followed us closely and in a tight-knit pack; turning when we turned, speeding up when we sped up, stopping when we stopped. It reminded me of when our cat got herself stuck in the handle of a plastic bag: no matter where she ran or what evasive tactics she used, the bag followed with loud crinkling, only getting louder the more she struggled. She’s still terrified of even the noise from plastic bags. But then again, she’s terrified of everything.

Wading through the boiling sea of drivers, meeting no one’s eyes and futily repeating “no, nope, not interested, NO!”, we arrived at the oasis of a tuktuk stand where prices are fixed and we could avoid the bartering game knowing we were not being taken advantage of. It was here we met Bobby. In about his early 50s, dressed in a clean and pressed pale green button-down shirt, he was leaning calmly on one elbow against the counter. His hair was combed back and he had a look of composure about him. Perhaps what set him apart the most was that his eyes lacked that certain “predator” gleam we kept finding ourselves looking into. The other distinctive feature about Bobby was that he was quiet. He said nothing as we approached him and the silence spoke volumes in the midst of all the clamor. After a refreshingly straightforward discussion about how hiring a tuktuk driver for the day worked, he sent us off with one of the more persistent members of our newly acquired posse. Then to our delight, through some sequence of events that we still don’t understand, it was not this man but Bobby who ducked behind the steering wheel and started the day as our driver.

The first thing Bobby did was welcome us to Agra and emphasize that we were not his customers, we were his guests and he would look after us while we were in his home. He loved his city and would share that love with us throughout our time there. It was all very comforting and we gave each other relieved grins, feeling confident that we had at last found someone we could trust.

Bobby pulled off the road at a small hotel near the main gate of the Taj and gave us the low-down on all the scam artists at the gate and inside. He also warned us that the security at the gate will allow in only water, phones, cameras and passports. Anything else is confiscated and thrown away or taken home by someone. I had read similar things on travel sites so we left our cords, external battery and food with him and set off ready to face the chaos that lay ahead. We arranged to meet back at the hotel after we were through.

After a few hours of successfully navigating the Taj and feeling proud of ourselves for again avoiding the scams, we headed back to the hotel meeting point. Next up for the day was coffee in whatever form we could find since the train station had not been able to give me my fix and I was running on caffeine fumes from a desperation tea. We wove our way through the streets, back to the hotel entrance. No tuktuk. No Bobby. Maybe he parked around the corner or down the street a bit. No tuktuk. Maybe he was inside the hotel, taking a break from the heat. No Bobby.

With a sinking feeling in our guts we asked at the hotel and the men inside glanced nervously at each other. One took out his old-school brick cell phone and told us repeatedly he would call his uncle and we could wait inside. The reality of the situation began to sink in. We had given our things to an Indian man named “Bobby.” While not a crushing blow, the external battery was certainly worth more than the 600rupee we were paying him for the day. We had not even thought to get this man’s real name, phone number or license plates. If we decided it was worth the trouble of reporting, how am I going to look a police officer in the eye and say that we’re looking for “Bobby” and that’s all we have to go on? But in all truthfulness, the sinking feeling had very little to do with losing some of our things. We had trusted Bobby and we didn’t want to be wrong about that.

As we exchanged worried and sheepish glances, the man with brick phone hung up and told us his uncle would be here in 10 minutes. We did not want his uncle, we wanted Bobby, and the things we had given him. Asking the man where Bobby was gave him the sudden urge to make a thorough check of his visual fields before deciding on something about a neighbor or cousin’s father dying. It was not what you would call an Oscar-winning performance. We did not ask the man with the brick phone for any additional information.

At this point we had three stellar options.

Option One: stick around and wait for this mystery uncle to show up, hope against all probability that he is not trying to cheat us and maybe even has our stuff (*insert laugh/snort here), leave if/when he’s a weirdo.

Option Two: get angry and demand to speak to Bobby, knowing full-well that these men at the hotel are in on this scheme. This plan had the particular downside of risking getting into a fight with shady men in a seedy hotel on a backstreet of Agra.

Option Three: cut our losses and walk, find a different tuktuk driver, forget we ever had those charging cords or external battery, accept that we were bloody idiots and not make that mistake again.

After a discussion that mostly consisted of grimaces and shrugs, we successfully reigned in the little monster inside me that always advocates for Option Two and decided that we would wait for 20 minutes and then leave if nothing good was happening. So we sat down in the deep indents left by a thousand other butts upon the faded faux-velvet leopard print cushions of the waiting room couches. The mid-morning sun filtered dimly through dirty window panes and highlighted patches of the peeling peach wallpaper. As if put there to emphasize the time we were wasting, a clock hung crookedly on the wall and ticked the seconds away determinedly.

The man with the brick phone left and the remaining man behind the check-in counter did his best to busy himself with the empty space on his desk. Ten minutes passed. We looked at each other and sighed, gently swatting at the flies and slowly coming to terms with our failure. Fifteen minutes passed and the man with the brick phone returned. He picked up his ancient phone and dialed, then dialed again, and again, and again. He gave us a shrug. “Not answering.”

And then, as we acknowledged the fact that we had indeed fallen for a scam and trusted someone we did not know, the awkward man behind the desk pointed excitedly and the man with the brick phone got up. “Here. He’s here.”

Great, his creepy uncle has showed up to take our money and now we’ll have to talk our way out of this too.

But to our astonishment, Bobby walked through the door! He was followed closely by someone eagerly trying to explain to us something about traffic but we didn’t care. Our Bobby had returned! He hadn’t left us to wither in a hotel lobby all day, or be carted off by brick phone man’s uncle. In fact, Bobby was brick phone man’s uncle. And he really did mean to take care of us for the day. Waves of surprise and relief washed over us as we climbed back into his tuktuk and he handed us our things. My remaining frostiness was fully thawed after he brought us to a cafe that served excellent espresso and I had to keep from crying over a latte.

We never found out where Bobby actually went, and we didn’t really care. He apologized and spent the rest of the day taking us from place to place and giving us tips about how to navigate the major sites. And he was always waiting for us after we finished, right where we had planned. We tipped him well and got back to Delhi with all the things we had left with. Yes, it was a stupid move to leave our things with a stranger and we learned to be even more cautious, but it was also a refreshing affirmation that there are trustworthy people everywhere and sometimes someone’s uncle is actually someone worth waiting for. Thanks for not robbing us, Bobby!