The Joy and the Peril of the Dead Sea 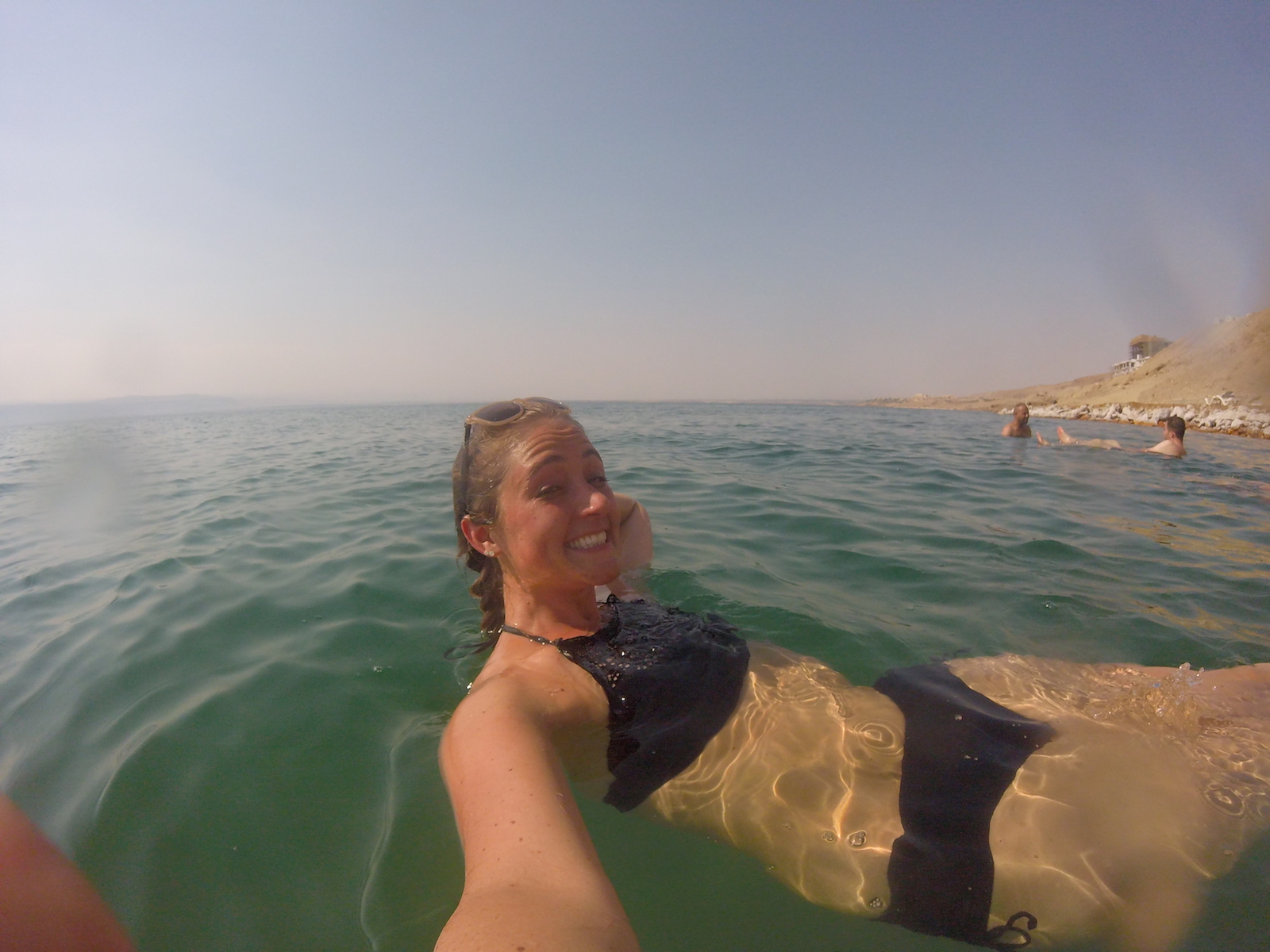 Laugh with me at my own stupidity (again), and find out just how accurate the naming of the Dead Sea really is!

During our time in Jordan, I was determined to get to the Dead Sea. I grew up hearing it mentioned in Sunday School and while I nerded out in my biology classes I read some pretty cool things about it. It’s also name-dropped in everything from table salt to beauty products and I figured it must have that selling power for a reason. So we arranged a trip stopping at the Dead Sea for our last day in Jordan and I was convinced this would be the coolest thing I would do while we were there.

Ok, now you’re briefed. Let’s jump into our day there.

We stopped at a resort on the Dead Sea for lunch and swimming in the afternoon. We had been warned us about the high likelihood of sunburn there- think about salting a potato and then putting it in the oven, except we’re the potato- so we doused ourselves in some good old spf50 before heading in.

Getting into the water was a little tricky. The crystallized salt on the rocks made a maze of little spear tips to avoid and Kolt ended up having a slow-motion fall, slicing his hand in the process. Ever put salt on a fresh cut? Silver lining: no sharks to smell the blood.

Once you make it past the first line of defense, you get to play. The buoyancy is so intense that it feels like something is pushing you out of the water. You can fly like Superman, lounge on your side, do sit ups, read a magazine if you’d like, all without sinking below the water. It’s pretty cool to feel so weightless.

On a hot day like ours it doesn’t take long to start feeling like you’re being brined. Water will occasionally splash in your mouth, so salty that it burns. Any wet skin that is out of the water quickly dries with a fine layer of salt left behind. To a paranoid mind, not mine of course, it may start to seem a bit like a trap. Like something is luring you in to make a tasty Martin stew.

There is one rule in the Dead Sea, which we were told by our driver before we got there: Don’t open your eyes under the water. Got it. I can handle one rule, right? … Right? Guys?

Ok, apparently I can handle a rule but I can’t leave without pushing it. I had it in my head that Dead Sea water will clear up all blemishes. So of course it has to be applied to the face. And I was watching people pay stupid amounts of money to smear mud on their face, which had to be washed off with something. I assumed this meant the water could be splashed like one of those ridiculous Neutrogena facewash commercials, except, bonus!, instead of getting water all over your bathroom it would just fall right back into the sea it came from. So I did it. I washed my face in the Dead Sea.

I knew pretty much immediately it was a mistake. My skin felt warm and my eyes were telling me not to open them. But you can’t close your eyes forever when you’re floating in a body of water named for the death it causes. So I opened my eyes.

Sweet Moses, I’ve blinded myself. I will never see again. My eyes burn with the fury of a nuclear reactor colliding with the sun itself. There is not even the remotest possibility that sight will return after this feeling. I’m so glad I got to see the Taj before I went blind. I guess my eyes have seen a lot for one life. Maybe I can become one of those blind painters and go viral on Facebook. Maybe I’ll get to give a TedTalk one day, but at this point it would just be about not chemically maiming yourself in a foreign country. Gotta do some better stuff first.

It is possible that I catastrophize things a bit. But I really did think I had at least temporarily lost my eyesight. Closing my eyes again to shut out the searing pain, I reached out for Kolt who had rubbed the corner of his eye and was experiencing a similar burning. He thinks the best of me, bless him, so he did not assume I had doused my entire face in water named “Dead.” But, as his burning died down over the following minutes, my eyes still refused to open more than a slit. He brought me over to the dock and we tried to figure out my next steps as a newly blind member of society. I would miss riding my bike.

It was then that the most unlikely hero emerged. A hefty man from Florida, in his 30s with a farmer’s tan, a baseball cap and some gas station sunglasses wandered onto the dock. With a slight drawl, he asked if we could use some help, maybe a water bottle. Our angel then strolled over to where we had stashed our things on the shore and returned with my water which I greedily poured over my face. And, miracle of miracles, I could see! We thanked him profusely as we gingerly made our way out of the sea. I am very curious how this Floridian ended up in Jordan but we didn’t get that far because when we told him we were from Chicago he replied “Sorry” with a derisive laugh. My fierce loyalty to my city was counteracted by the fact that this somewhat abrasive stranger from Florida(!) had just restored my sight. So, I stood dumbstruck on the shore of the Dead Sea as he sauntered off without a retort.

We picked up the remnants of our pride, ran over the lava that is called sand to the nearby showers and rinsed off the death water before taking a nice long soak in a pH balanced pool at the resort. My eyes still work and my zits did clear up so overall let’s call that one a win. Sorry Chicago, you know I love you, we just have to let Florida have this one.