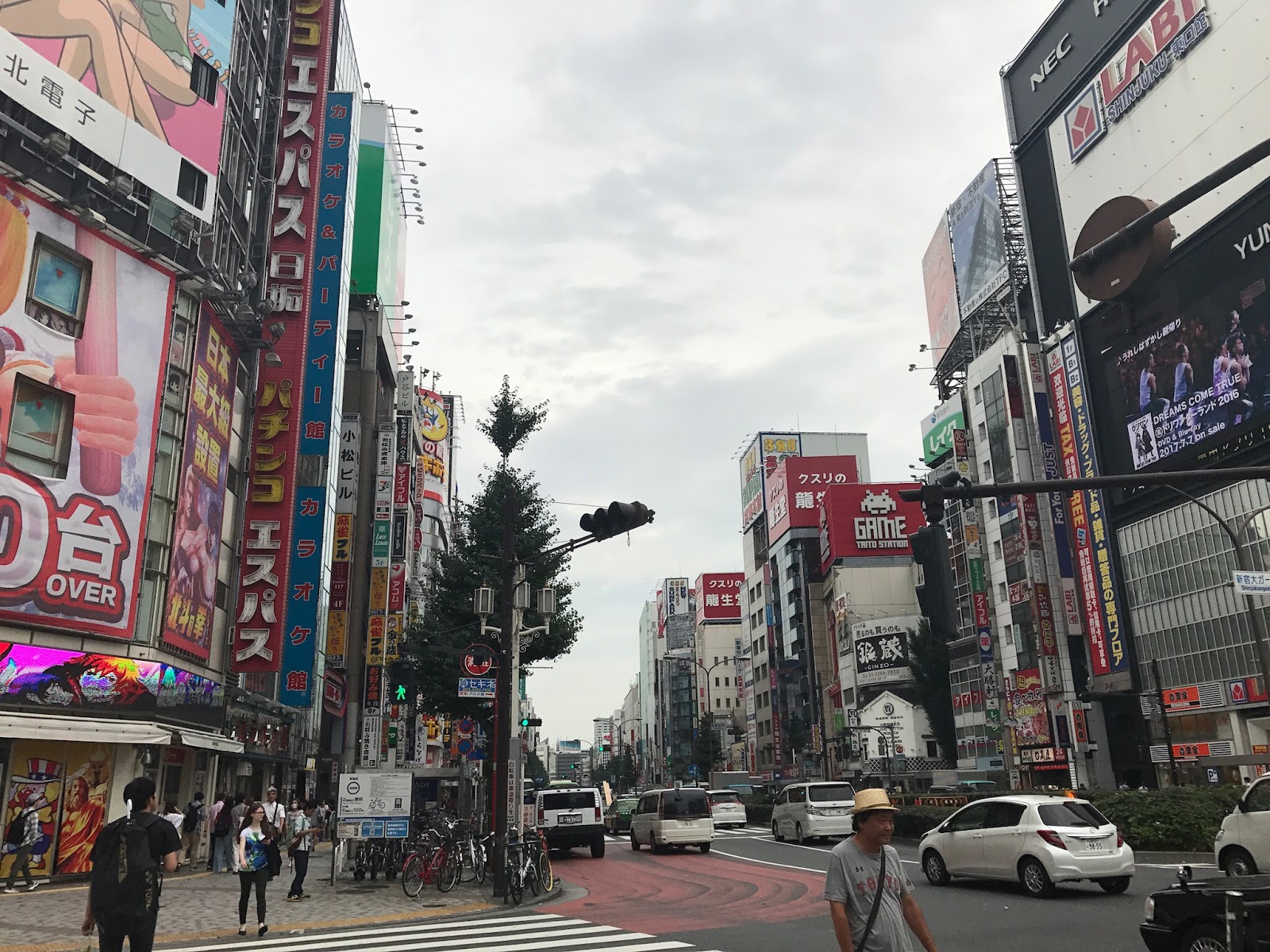 After finally processing our whirlwind 5 days in this manic metropolis, I managed to get a piece of the experience down in writing. Huge thanks to our friends Austin and Nagisa for hosting us and showing us their distinctive city!

Tokyo is a beehive (shout out to Babysitters Club Club podcast fans, #beetheory). There is a constant buzz of voices, electricity, rails and random cutesy melodies. Everywhere you look you see movement: streams of cars and pedestrians with trains speeding overhead, all set against the backdrop of shifting digital displays. The skyscrapers tower over you and incomprehensible recorded announcements shout from every corner, mingling with the shrill voices of the vendors who beckon for you to come spend your yen. Smells of grilling meat mix with sweat and exhaust. You stagger among the hordes, dodge selfie sticks, and try to decipher street signs as the heat and humidity (why did I not think Japan could get hot?) plaster your clothes to your back. And then it all stops. The humming in your ears fades away and the movements slow. Your nose starts to recognize the scents of earth and water with faintly floral notes in the air. You look around and somehow the sights of the city have shifted to a peaceful garden or a long wooded path, accented by angular shinto arches and tiled roofs. In the middle of Tokyo’s urban jungle exist massive green spaces, carved out for temples, shrines, or parks, respites from the bustle if not from the heat. And this is Tokyo in a nutshell, a constant collision of contrasts: concrete against forest, ancient with modern, conformity versus rebellion. What a place to start our travels!

We were lucky to have friends to receive us in our jet-lagged daze. My close friend from college, Austin, and his lovely wife Nagisa opened their small Japanese-style apartment to us and promptly gave us an entire third of their living space. The best of hosts, they spent a full weekend showing us their favorite spots in the city while we got to catch up and get to know their vivacious 18-month-old daughter, Kohaku. First they took us out of the city to Kamakura where we hiked through hydrangea-laden paths behind a stunning buddhist temple before encountering a buddha taller than a 4-story building. They introduced us to a ramen that blew our minds (see Kolt’s review) and showed us the ways of conveyer-belt sushi. Austin traipsed with us through the boiling streets of Tokyo, showing us how to do the Shibuya scramble (essentially a mob crossing of a major intersection in downtown) and bringing us to his favorite shrine (Meji Jingu), built for the imperial family. We saw Takeshita street, the mecca of the ultra-cutesy “kawaii” Japanese subculture (think pink outfits with short skirts, animal ears, and cartoons) and even went to an owl forest. Seriously. We pet owls. They are so soft. It was wonderful to see the place our friends call home and to hear their insights on the culture and the pace of life within their city.

After using up Austin and Nagisa’s entire weekend, we successfully struck out on our own and navigated our way through the particularly complex transit lines to an AirBnb in the heart of Shinjuku, a major area of Tokyo. Our AirBnb host, Hanamaru, was a lively character and he immediately invited us to hang out, drink beer, and make sushi with him and his girlfriend that night- which we obviously could not pass up. Hanamaru is Japanese and his girlfriend, Letecia, is French so we had a fun night of discussing language, culture, and things that transcend both- namely food, laughter, The Blues Brothers, and the Red Hot Chili Peppers. As all good nights go, a guitar was eventually found and we were serenaded by the musical stylings of our new friends, including songs they had written themselves. We also discovered that difficulty remembering lyrics when just presented with chords is a universal trait.

We spent our last 2 days in Tokyo exploring markets, playing in an arcade in Akihabara (electric town), visiting a Samurai museum, eating street food, and fruitlessly trying to understand the cultural phenomenon that is host clubs and hostess cafes. We eventually got a break from the heat with some rain on our last night but, alas, it was then that I discovered my raincoat is not actually waterproof. But never fear! Japan has some stellar shopping and I’ve already replaced it with a $3 poncho that is tastefully covered in cartoon bears and hedgehogs. We left Tokyo and it’s complicated rail system by bullet train on July 5th, looking forward to our next stop in Kyoto: “the cultural capital of Japan.”